OmnibusBox II, a member of the Omnibus family, is the next generation appliance for avionics databus test and simulation in a lab environment.

The OmniBusBox II (OBB2) enables computers and networks to interface with multiple avionics databuses for testing, validating and simulating commercial and military avionics equipment and systems. These versatile units can be controlled through Ethernet or USB, or can be programmed to operate standalone. Readily available as Commercial Off-The-Shelf (COTS) products, the OBB2 is perfect for challenging simulation, test, interface, bridging, control, simulation and data recording applications.

The OmniBusBox II is the next-generation of Astronics' popular OmniBusBox product with faster I/O and processing capabilities. The OBB2 is highly configurable and includes built-in standard peripherals (Ethernet, serial, and USB), along with four internal Cores that can be populated with a variety of databus protocols and discrete I/O modules. With the newest advanced set of MIL-STD-1553 and ARINC 429 modules, users can verify wave form compatibilities, test functions of bus shorts and opens, and—when combined with our CoPilot® software—perform lab, production and flight test verification and simulation right out of the box.

At the heart of the OmniBusBox II is a P1022 Freescale PowerPC processor and Ballard's FPGA protocol engines. In addition to the built-in standard peripherals and core I/O functions, PMC/XMC and Mini-PCIe sites in the 4-core version provide customer expansion capabilities such ARINC 664, CAN, IEEE 1394 and wireless protocols. The OBB2 includes extensive timing synchronization with multiple sources including 10MHz, PPS, IEEE 1588 and IRIG A/B. The 1U high case is easily placed on a desk or rack mountable. Though designed primarily as a lab product, the OBB2 has potential for use in large fixed-wing aircraft and light vehicle applications.

Each Omnibus II product includes an array of functional features to which I/O is added through the use of interchangeable modules. When ordering an OmniBus product, you can add the combination of modules to get the exact mix of I/O you need. Each OmniBus product can accept at least two modules, and each module has its own circuitry to handle the channels and protocols associated with it. 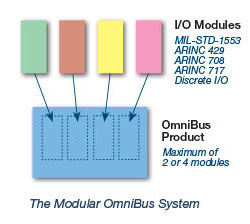 OmniBusBox II is available in a large number of configurations that all share the standard features below: