The AB2-VDU Video Distribution Unit (VDU) is an ARINC 708 databus repeater. It enables up to four (4) radar Control/Display Units (CDUs) to be driven by a single display databus.

The VDU solves the databus loading problem that occurs when more than one CDU is connected to the ARINC 708 databus. 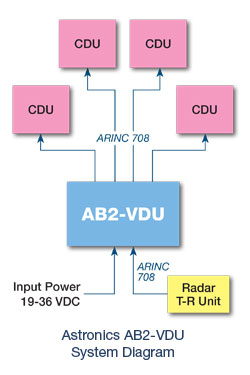 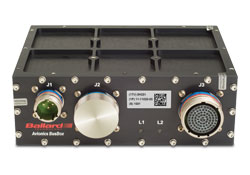 The AB2-VDU distributes a single ARINC 708 databus signal to up to four radar control/display units. The unit operates from 28 volt DC aircraft power. After power is applied, the VDU automatically repeats the incoming signal on the four outputs. The VDU is a hardware device; there is no software to load or upgrade.

Databus termination must be carefully considered, especially when adding CDUs to an existing system. A simple weather/terrain radar system has one terminator in the T-R unit and another in the CDU. If a second CDU is added, it can cause an impedance mismatch. In addition, long stubs will distort the signal, resulting in unreliable operation.

The AB2-VDU solves both the loading problem and the stub problem. The input and each of the four outputs can be individually configured as terminated or unterminated to suit the application. This provides an ideal transmission line for each of the databuses—terminated at both ends and no stubs. Plus, if all the outputs are not needed, unused outputs can be disabled to reduce emissions.